What Is The Long-Term Servicing Channel (LTSC)?

If this sounds a lot like embedded devices to you, you are on to something. In fact, as Microsoft consultant Greg Nottage noted in his blog post, the “LTSC 2016 shares the same codebase as Windows 10 IoT, which is the evolution of Windows Embedded OS.”

Because these systems typically have been carefully developed and thoroughly tested for a specific purpose only, it would be counterproductive to upgrade their OS every 6-12 months. Instead, Microsoft will support each LTSC release for 10 years (following the traditional Microsoft support model for the Windows operating system with 5 years of mainstream support and 5 years of extended support) without changing its features and functionality during its life-cycle.

Of course, companies who are looking to adopt Windows 10 for these specific scenarios do not have to wait ten years for a new version. Microsoft will release a new Windows 10 LTSC edition every three years in accordance with the on-premise Office release schedule, so a wipe and load upgrade path is available if not necessarily required. 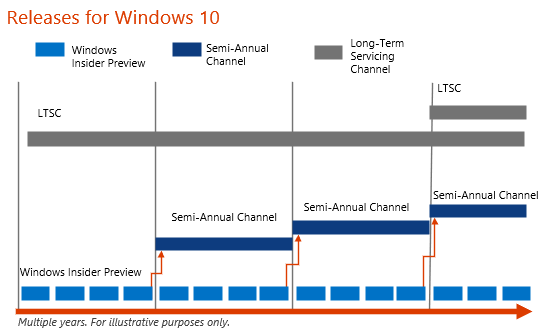 As you probably know, the Long-Term Servicing Channel differs in that regard greatly from the mainstream Windows 10 Semi-Annual Channel (SAC), which delivers two feature upgrades within a year: a Spring Update that is released around March and is supported for 18 months and a Fall Update that is released in the October time frame and receives 30 months of support.

The Pros & Cons Of Windows 10 LTSC For Enterprises

Rather than walk you through each and every strength and weakness of the LTSC in an enterprise context, I will let Chris Morrissey, Principal Program Manager at Microsoft for the Global Windows Servicing & Delivery Communications Team, explains it:

Microsoft Warns Enterprises To Stay Away From Broad LTSC Adoption

Thankfully, the predictions (made months leading up to and following the release of Windows-as-a-Service) that the LTSC would become the preferred Windows 10 edition for many enterprises has not come true. There are many reasons why enterprises should stay away — Mr. Nottage lists 14 of them — but here are my top three:

Because LTSC editions will not be supported on hardware introduced after their release, and therefore don’t keep pace with new hardware releases as the Semi-Annual Channel does, IT managers who adopt the Long-Term Servicing Channel in a broad enterprise scenario could quickly find themselves in quite a mess.

Windows 10 LTSB will support the currently released silicon at the time of release of the LTSB. As future silicon generations are released, support will be created through future Windows 10 LTSB releases that customers can deploy for those systems. For more information, see ‘Supporting the Latest Processor and Chipsets on Windows’ section in  Lifecycle Support Policy FAQ — Windows Products.”

According to a Gartner analysis, this will result in more frequent, maybe even yearly upgrade cycles. In addition, Surface hardware is not supported.

LTSC Doesn’t Include Features And Functions That Evolve Over Time

To ensure continuity, the LTSC edition does not contain any features and functions that require change over time, e.g., it includes the Internet Explorer rather than Microsoft Edge, the Microsoft Store, Cortana, or Microsoft apps. This means devices that are running productivity apps, such as MS Office, use Windows Store applications, or are used to browse the internet are unsuited for the LTSC.

Furthermore, it does not support ConfigMgr Express Updates nor does it keep up-to-date with feature enhancements to Windows Defender Advanced Threat Protection (ATP). In addition, enterprises will potentially suffer hardware and software support limitations.

In-Place Upgrades Are Not Supported With LTSC

If you were hoping to run in-place upgrades from Windows 7 to Windows 10 LTSC edition, you are out of luck. While SAC feature upgrades can be streamed from Microsoft’s content network locations as in-place upgrades, LTSC upgrades require local .MSI files to be installed. Due to the specific nature of this Windows 10 edition, non-security OS fixes and enhancements may not get back-ported.

The Windows 10 Long-Term Servicing Channel edition was purely developed for devices and scenarios that cannot tolerate frequent change. While it is tempting to avoid the faster upgrade pace of the Windows 10 SAC releases, it should not be an option for broader enterprise deployment in the long run as it will cause you to manage and maintain multiple versions on top of all the support and feature limitations you will encounter.

Rather than focusing your energy on how to avoid it, enterprises should embrace the new velocity of change as an advantage and adopt the right project methodology and Evergreen IT tooling to make future upgrades as painless and least disruptive as possible.

There are no reviews yet.